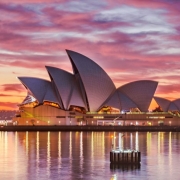 The name Australia (pronounced /əˈstreɪliə/ in Australian English) is derived from the Latin Terra Australis (“southern land”), a name used for a hypothetical continent in the Southern Hemisphere since ancient times. When Europeans first began visiting and mapping Australia in the 17th century, the name Terra Australia was naturally applied to the new territories.

Until the early 19th century, Australia was best known as “New Holland”, a name first applied by the Dutch explorer Abel Tasman in 1644 (as Nieuw-Holland) and subsequently anglicized. Terra Australia still saw occasional usage, such as in scientific texts. The name Australia was popularized by the explorer Matthew Flinders, who said it was “more agreeable to the ear, and an assimilation to the names of the other great portions of the earth”. Several famous early cartographers also made use of the word Australia on maps. Gerard Mercator (1512–1594) used the phrase climata australia on his double cordiform map of the world of 1538, as did Gemma Frisius (1508–1555), who was Mercator’s teacher and collaborator, on his own cordiform wall map in 1540. Australia appears in a book on astronomy by Cyriaco Jacob zum Barth published in Frankfurt-am-Main in 1545.

The first time that Australia appears to have been officially used was in April 1817, when Governor Lachlan Macquarie acknowledged the receipt of Flinders’ charts of Australia from Lord Bathurst. In December 1817, Macquarie recommended to the Colonial Office that it be formally adopted. In 1824, the Admiralty agreed that the continent should be known officially by that name. The first official published use of the new name came with the publication in 1830 of The Australia Directory by the Hydrographic Office.

Colloquial names for Australia include “Oz” and “the Land Down Under” (usually shortened to just “Down Under”). Other epithets include “the Great Southern Land”, “the Lucky Country”, “the Sunburnt Country”, and “the Wide Brown Land”. The latter two both derive from Dorothea Mackellar’s 1908 poem “My Country”.

Language in Australia
Scroll to top